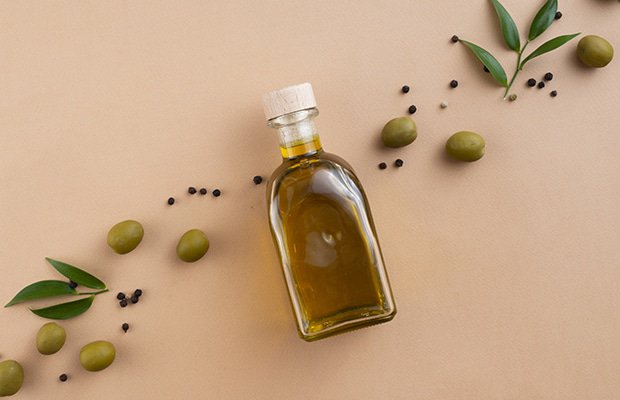 Now that the low-fat life is a thing of the past, you’ve probably considered pouring olive oil over your entire life.

Really, though, with about a thousand different types of cooking oils seemingly deemed a-okay now, it’s tricky to tell which are healthy — and which to use for different recipes and cooking methods.

Though the keto diet has made butter and coconut oil (both of which are high in saturated fat) crazy-popular, the USDA Dietary Guidelines for Americans  recommends limiting saturated fat to less than 10 percent of your daily calories, choosing oils higher in unsaturated fat instead.

Plus, the right smoke point (the temp at which an oil starts burning and breaking down) is also crucial — especially when you’re cooking at high heat, like searing a steak.

Here, dietitians break down seven of the healthiest cooking oils in the game (and three questionable ones), so you can keep your pantry as healthy — and your cooking adventures as catastrophe-free — as possible.

“This is one of our favourite cooking oils,” say Lyssie Lakatos, and Tammy Lakatos Shames, co-owners of The Nutrition Twins. “The flavour isn’t very strong, so it doesn’t overpower the foods cooked with it.”

Avocado oil contains vitamin E, a fat-soluble vitamin that works as an antioxidant to protect cells from damage.

Latakos and Latakos Shames recommend using this one for high-heat cooking methods, like stir-frying, sautéing, and searing.

Although you probably don’t want to use hazelnut oil to cook potatoes or sear meat, its sweet aroma makes it a fun option for fall vegetables like winter squash, carrots, and parsnips.

Thanks to lots of monounsaturated fats, hazelnut oil has a high smoke point and lends itself well to high oven temperatures. Like avocado oil, hazelnut oil also provides the added bonus of some vitamin E.

High in antioxidants and monounsaturated fats, extra-virgin olive oil is one of the healthiest oils you can cook with Lakatos says.

“Even though it doesn’t have  highest smoke point, its antioxidants resist oxidation,” she says. The result: You reap more of their benefits.

Lakatos recommends using EVOO for roasting or stewing. (Skip it for higher-heat cooking, like pan-frying.)

Though the word “refined” doesn’t exactly have a great reputation in the nutrition world, in this case it’s a game-changer, says Lakatos Shames. While refining olive oil strips out some antioxidants, it also raises its smoke point.

Opt for light or refined olive oil for high-heat cooking like pan-frying.

Because it’s pretty much guaranteed to make everything taste like peanuts, peanut oil isn’t the best choice for  kind of cooking.

That said, it works great in any recipe that calls for peanut butter (think cookies, cakes, stews, etc.), or in Asian-inspired recipes, like stir-fries, that could benefit from some extra flavour.

Made up of mostly monounsaturated fats, peanut oil has a high smoke point and can handle whatever type of cooking you want to use it in.

“Algae oil contains lots of antioxidants and has a high smoke point,” Lakatos Shames says. Since it also has a neutral flavour, you can use it in just about any kind of cooking.

Just note that algae oil is relatively new to the market, so it tends to be a bit more expensive than other neutral oils.

Maybe because it’s fairly cheap, or because it’s often used in not-so-healthy fried foods, canola oil gets a bad rap.

However, this oil is made up of mostly unsaturated fats and has a high smoke point, making it a versatile choice for cooking, say Lakatos and Lakatos Shames. When you want to treat yourself to something fried, canola oil can take the heat.

Steer clear of bottles of oil simply identified as ‘vegetable oil.’ “When the oils aren’t specified and it’s just a mystery blend of oils, you don’t know what you’re getting,” says Lakatos.

Since some of these oils may have a lower smoke point, they’ll burn at a lower temperature, creating carcinogens (which aren’t great for long-term health) as they oxidize.

However, while most oils have a relatively low environmental impact, the production of palm oil has been identified as a major contributor to deforestation in Southeast Asia, per the

“It’s so environmentally damaging and very high in saturated fat,” Lakatos Shames says. Skip it, both for your health and the planet’s.

And the ‘Most Controversial Oil of the Year’ award goes to…

Coconut oil is subject to both a lot of praise and a lot of criticism, and both are valid.

Trendy coconut oil is very stable and has a high smoke point, which make it well-suited for high-heat cooking, says Lakatos. Plus, it’s also relatively high in antioxidants.

While you don’t need need to cut the stuff out completely, don’t make it your go-to oil just yet.