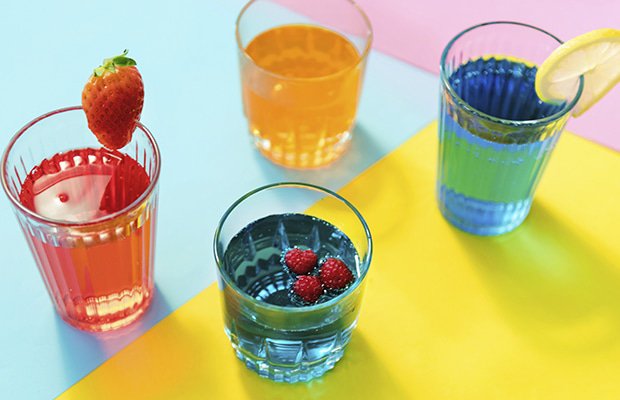 The holidays are definitely the time for imbibing—party punch, mulled wine, champagne — and honestly, you should go right ahead and partake if you want to.

But when January 1 rolls around, many people are looking to get back on a schedule and into a routine, and to simply feel more like their pre-holiday selves in general. If you’re someone who is searching for a healthy reset that doesn’t involve revamping your entire eating plan, you might be interested in Dry January.

Hold on, what is Dry January, exactly?

Honestly, it’s pretty straightforward — you steer clear of alcohol for the entire month of January.

The concept actually originated in the UK in 2013, when a non-profit group called Alcohol Change UK started the movement with the goal of raising money for alcohol abuse awareness and treatment.

The trend caught on around the globe, and now lots of people choose to take part in Dry January as a way to simply drink less or reset after a month or two of holiday partying.

How do I know if Dry January is right for me?

If you’re going to successfully abstain from alcohol for an entire month, it’s important to understand  you’re doing it. It’s perfectly normal to want to cut back on booze after the holidays, especially if you feel like you haven’t had control over your alcohol intake recently. First, it’s useful to understand what even counts as heavy drinking.

“With binge drinking, the blood alcohol level increases rapidly, and with increasing blood alcohol level, the risks of impairment increase,” says Dr Trang M. Vu, assistant professor of medicine at Icahn School of Medicine at Mount Sinai. These impairments include reduced inhibitions, motor discoordination, and memory problems which can lead to car rashes, falls, risky or violent behaviour, and more, she says.

If you are binge drinking or drinking heavily, talk to your doctor before abruptly quitting for a month. “Frequent binge drinking or heavy drinking can build up your tolerance to the effects of alcohol, and stopping can lead to alcohol withdrawal, which can range from shakes, anxiety, irritability, insomnia, nausea and vomiting to very severe symptoms like hallucinations, delirium, coma, seizures and death,” says Dr. Vu. Your doctor can help you determine how best to slow down or stop drinking based on your current habits.

If you don’t feel like you have an alcohol problem but want to try Dry January anyway, it could result in several positive health benefits. You may not notice them within the first month, says Dr Vu, but if you decide to keep limiting you alcohol intake or abstaining all together, you’ll feel more of the healthy effects listed below.

So…what are the health benefits of Dry January?

There are a lot of potential pros, tbh (you know, in addition to saving money, because alcohol is expensive AF). Here’s what you can expect:

“It may sound counter-intuitive, since most of us are likely to quickly pass out asleep after a night of drinking more than usual, but too much alcohol actually screws with your sleep status,” says Brigitte Zeitlin, registered dietician and owner of BZ Nutrition in New York City.

he adds that, after having a few drinks, your body doesn’t get a chance to reach the deep sleep (a.k.a. REM sleep) that you need to help your body de-stress, repair, and replenish itself for the upcoming day.

When you ditch the alcohol, however, you won’t have those sleepy-yet-restless nights. “Practicing a sober month will actually boost your sleep help and have you feeling more restful and energized in the mornings,” says Zeitlin.

2. Your skin could clear up.

Alcohol is a diuretic, which means it can make you go to the bathroom more frequently — and ultimately leave you a bit dehydrated, says Zeitlin. And that dehydration can take a serious toll on your skin.

“We tend to forget that we still need to focus on hydration during the cold months because we aren’t sweating, but the winter dries out your skin and body more than you realize,” she explains. “By ditching the alcohol and upping your water intake, it’s really a win-win for your hydration status and will leave your skin feeling healthier and looking more radiant.”

Plus, the high levels of salt and sugar content in alcoholic beverages may trigger the hormone IGF-1, which causes an over-production of oil in your skin (hi, pimples!). Team this with spiking insulin levels that cause inflammation and you’ve got yourself a recipe for acne. A booze hiatus can potentially improve acne for those who have it, as previously reported in .

Dropping pounds when you take a break from booze is pretty standard, says Zeitlin — in fact, if you were to make zero other changes to your diet (except for cutting alcohol), you’d still probably lose weight.

“One alcoholic drink is typically 150 to 200 calories, which can really add up,” Zeitlin says. “Additionally, when we drink a lot we tend to eat more than we realize as well, so cutting back on the alcohol will likely help you to also cut down on some of the mindless overeating that usually happens after the third (or fourth or fifth) round of cocktails.”

As an added bonus, you may also find that you are less bloated or puffy without those nights of drinking too much, which in turn will make you feel naturally leaner and better, Zeitlin says.

4. Your immune system could get stronger.

Being drunk can suppress your immune function, which can make you more vulnerable to the pathogens that cause the cold and flu, among other things, says Dr Keri Peterson, a WH advisory board member. In addition, frequent drinking can cause inflammation throughout the body. All of this means that taking a break from booze could help you better fight off any seasonal illnesses. Getting better sleep because you’re sober certainly doesn’t hurt either.

5. You may feel less anxious.

The day after drinking, you might have the typical nausea and headache that come with a hangover. But you might also experience what’s called “hang-xiety,” or anxious feelings that are experienced as part of a hangover, says Dr Peterson. If you stay away from booze for a month, you’ll be hangover and hang-xiety free, which means more peaceful nights and less worrisome mornings.

Another benefit of Dry January? Less headaches, says Dr Peterson. These are usually brought on by the dehydration that happens when you drink. They’re also a classic hangover symptom that you won’t have to worry about during your dry month.

7. Your overall health will improve.

As your body adjusts to a lack of alcohol, your blood pressure will likely lower and your liver will heal from any effects of heavy or binge drinking, says Dr Peterson.

This Is Exactly How Drinking Alcohol Affects Your Workout

This all sounds great…but how do I actually do Dry January?

First, determine and understand why you’re committing to Dry January. “Knowing your motivation will keep you more mindful of triggers or moments of wanting to give in,” Zeitlin says. “Tapping into your personal reasons as to why you’re doing this will help you hit that 31-day marker.”

Then, commit yourself to ditching the booze. Zeitlin suggests possibly recruiting a friend or family member to do it with you, as you may find it easier to stay sober on Saturday nights if you’re not doing it alone.

You can also make it a bit easier on yourself by avoiding thinking about what you’re supposedly missing out on — and when you do go out, drinking other hydrating beverages like water (flat or sparkling), tea (hot or iced), or something like a matcha latte, Zeitlin says. Mocktails, or alcohol-free cocktails, are always a good swap.

You can also swap the “drinks” dates with your friends for dates to take a walk, go to a workout class, or just grab dinner, because honestly, you don’t  alcohol in every social situation.

Everything You Need To Know About Alcohol And Weight Gain

Okay, but what happens when February hits?

The first thing Zeitlin advises is checking in with yourself (another benefit of Dry January is having a chance to assess your relationship with booze, she says).

“Ask yourself how you’re feeling without the booze. Did you have more energy, save more money, or lose the few pounds you wanted?” she says. “Then use this as a starting point to re-adjust your relationship to alcohol, if it’s needed.”

In some cases, those who voluntarily quit alcohol for a month may end up drinking less even after the period ends — that’s what happened in a 2016 study published in the journal ; after participating in Dry January, participants reported healthier drinking habits even after the month was over.

Still, if you don’t feel any changes, it’s fine to go back to how your relationship with alcohol was before the month started. Just keep in mind that it’s still a good idea to limit your booze to one or two drinks a night, says Zeitlin—or no more than seven drinks per week for a woman, according to the National Institute on Alcohol Abuse and Alcoholism.